you are here > Home > About > Blog > CAR magazine review

► Multimac four-berth child seat review
► Love your car, but hate its impractical rear bench?
► A Multimac, from £1299, may be the answer

Utterly opposed to selling your BMW M4 or Audi RS6, even though you’ve got three kids all needing bulky child seats? Engineer Kevin Macliver found himself in just such a spot, when his fourth child arrived in the world: not wanting to get rid of his current car, but needing to protect his family.

The dilemma inspired him to dream up the Multimac, a slide-in rack of child seats that took the environmental engineer 13 years and £750,000 to develop to European standards. Housed in an aluminium frame, the three- or four-berth Multimac accommodates children from birth up to 12-years-old, strapped in race car-style five-point harnesses or using adult belts for older kids.

The Multimac came onto my radar after my third daughter was born in September 2018. My circumstances highlighted Skoda’s folly with my then long-term test car, a Kodiaq: why equip only two Isofix points on a crossover with pretensions to transport seven people? Macliver, a CAR reader for decades read my criticisms of the Skoda, and persuaded me to trial the Multimac for three weeks.

How do you fit a Multimac?

In the 10 years Multimac has been operating, the company and its agents have fitted around 5000 seats. That’s provided Macliver with a vast database on the many ways to strap the aluminium chassis across the rear bench.

In many VW Group cars – including the Kodiaq – the secret is to switch a regular bolt helping hold a seat runner in place for a bolt with a towing eye-style hoop at the top. One tethering strap passes through this and is ratcheted into a clamp within the aluminium seat base.

The other tether goes around the bar to which a Kodiaq seat belt is strapped – Macliver knows it’s strong enough because regulations demand seat belt anchors must cope with a load of 1350kg. That compares with the 400kg load demanded of Isofix sockets. This second strap is again ratcheted into place, and the Multimac frame is locked down.

Then it’s merely a question of folding out the bracing telescopic legs and fitting the head restraints and seat cushions into each place, or locking in a rearwards-facing ‘Minimac’ seat for babies. Go through the process in reverse to remove the Multimac, enabling owners to carry adults or fold down the rear seats once more.

The Multimac is a smart-looking piece of kit, with its sporty racing harness vibe. They’re easier to load kids into than child seats with their bulky and obstructive sides, and my daughters – who are masters of complaining – had no grumbles about comfort levels. The aluminium frame is noticeable when you look over your shoulder, but customers can at least match up their car's leather upholstery with the Multimac's for around £800.

Macliver’s daughter has a Mini Cabriolet with one of the smaller-width frames trimmed in brown cow skin to match the interior; another customer had his Multimac delivered blue-purple-red to match the BMW M Division’s tricolore.

The four-berth is more popular than the three-seater – understandable as it gives flexibility for a three-child family to take a friend along. The only downside is the hassle factor of having to remove the heavy Multimac if you need to transport adults or fold the rear seats down, in which case you’ll need somewhere such as a garage to store it.

But it’s an ingenious piece of kit that impressed everyone I showed it to. Prices start at £1299 for the narrowest three-seater (or £1949 trimmed in leather) to fit a Fiat 500 or Audi TT, rising to £1499/2299 for the widest four-seater which will slot nicely into a 5-series or Range Rover.

How does Multimac perform in a crash?

Macliver claims the Multimac’s crash test performance exceeds that of an individual child seat, with a rigid aluminium frame and bracing legs that buckle to absorb impact energy. The design surpasses the European Safety Standard for child seats, passing with a range of loads including dummies representing four 12-year-old kids. If you do have one, it’s worth notifying your insurance company so you can ask for a replacement in the event of the car being crashed or stolen.

It’s a plucky British engineering story, with the aluminium chassis manufactured by an MOD contractor in Bedford, and the seats upholstered by Jag and Bentley supplier Automotive Trim Developments in Coventry.

Macliver has fitted Multimacs to 500 different models of car in just over a decade. He claims the three child-dilemma is more common than you might think, with some 10,000 UK families growing from two to three children a month. Only 100 of those monthly newbies typically buy a Multimac.

And who’s the typical Multimac customer? ’21 per cent go into BMWs because those customers don’t want to drive a bus!’ jokes Macliver. We know where he’s coming from… 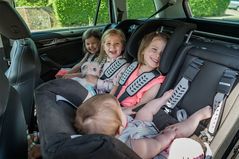