We had four children and a normal five seater car, we considered the MultiMac as it meant that we could get all four children in to the back of the car and we would not have to spend tens of thousands of pounds on a seven seater vehicle.

We saw MultiMac promoted on the TV programme Fifth Gear and then we made contact with the company. Kevin Macliver then came to our house to show us the MultiMac.

We checked that the car seats had been duly certified and approved by the regulators and that they were safe for our children.

Unlike "traditional" car seats, the MultiMac can be upholstered in identical material and colour combination to your existing car making the seats appearance blend in to the interior of the car.

The ultimate decision that made us purchase the MultiMac aside from the fact that they were approved by the regulators was that it meant we did not need to purchase another vehicle and with the MultiMac we could take the children in comfort and safety in the existing car.

Yes, definitely. The MultiMac has changed the whole way that the family can now travel. Even when we only had three children we used to have to put one car seat on the front passenger seat and have two car seats in the rear and then we had to squeeze in the middle of the two car seats.

Now, even with four children, they are all fitted safely in to the rear of the vehicle.
The MultiMac has ultimately saved us a lot of money as we have not had to go out and purchase a seven seater vehicle. We have kept our normal five seater car, which means that we also have plenty of boot space for carrying all the children's paraphernalia. Our concern with the seven seater car was that the two extra seats meant you lost a lot of boot space and once you put a push chair in the boot it was full.

Life is significantly easier with the MultiMac; we all travel safely as a family in the car.

I cannot speak more highly of the MultiMac car system. It really has changed how we travel as a family and we now travel more safely and secure in the car due to the MultiMac. We have not had to sacrifice boot space in the car by having to get a car with two extra seats in the rear which is fantastic as with four children there is so much to take on every car journey.

Dealing with MultiMac as a company was very easy and straightforward. After a visit from Kevin Macliver, I placed an order on the website and lodged my deposit for the MultiMac. I was kept informed via e-mail for tracking my order and once the car seat was fitted I paid the balance of the funds. The fitment of the MultiMac was executed by a firm of professionals which made life very easy. I strongly recommend the MultiMac to people with three or more children. 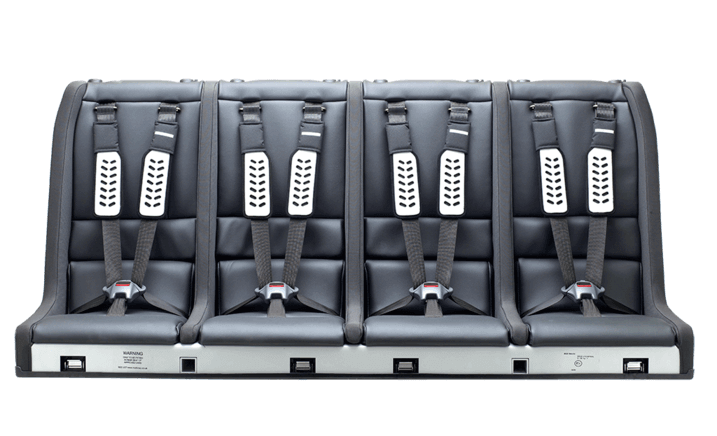